Over the last 18 months, 80six has carried out extensive R&D testing with LED and cameras for film & TV productions with trusted partners such as Epic Games, Dimension Studio, DNEG & OSF.

"To be able to confidently advise our clients of not only the benefits but also the pitfalls of shooting LED for in-camera VFX based on our experience has been invaluable." Jack James, Director at 80six.

80six's interest in virtual production stemmed from delivering xR (extended reality) stages, which incorporate similar technologies and techniques. Jack continues: "The silver lining to come out from the pandemic was the time we had to research these techniques. Working with the likes of ARRI, ROE Visual, Epic Games, Brompton Technology on various LED panel and camera tests has guided us on our choice for tech for our own in-house studios". 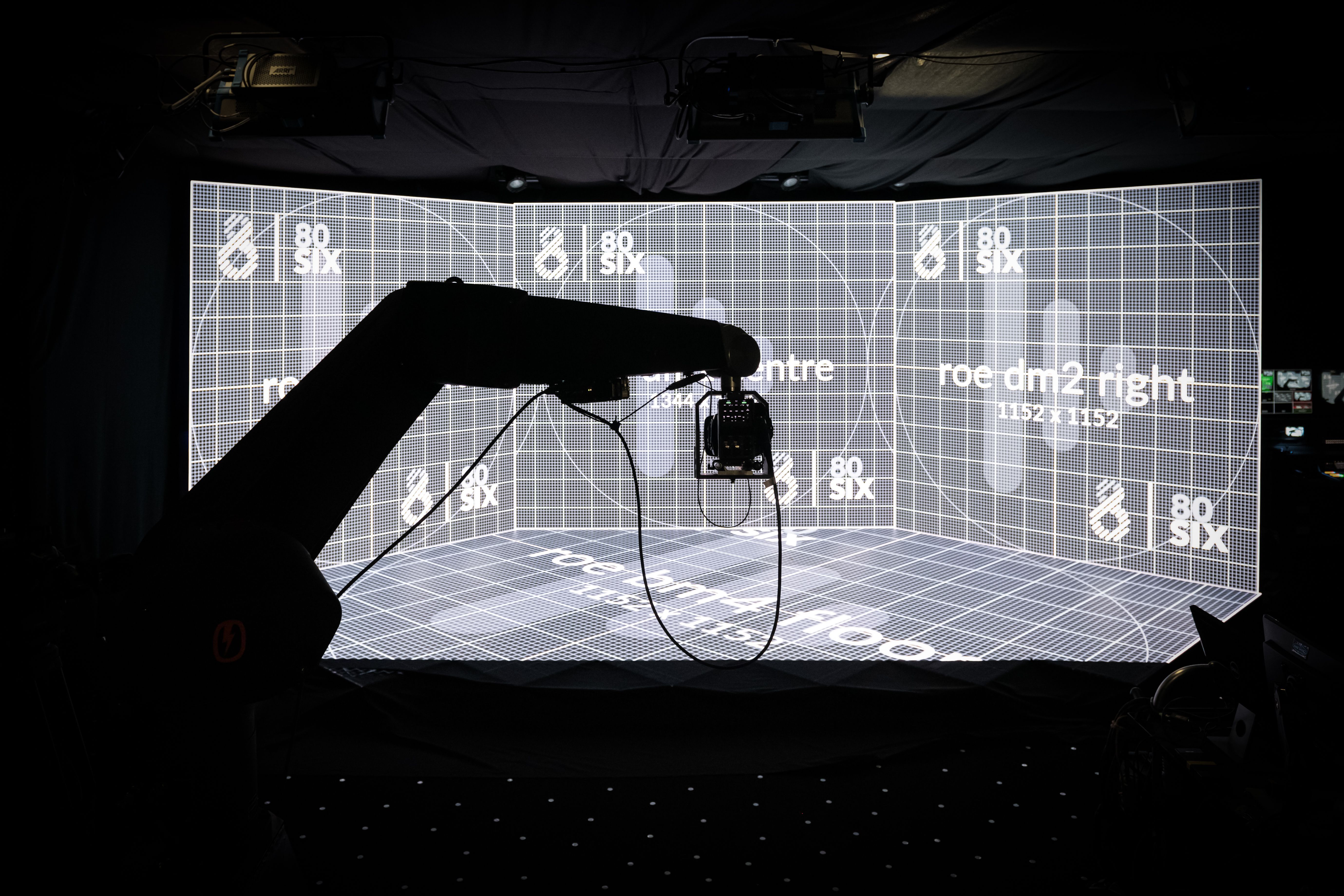 Built at 80six's HQ in Slough, the high-tech studios display two semi-permanent ready-to-shoot LED stages, featuring high-resolution, ROE Visual LED walls, controlled from a central gallery. Specifically designed for film and TV productions, the Virtual Production Stage is one of the few purpose-built LED stages in the UK for commercial use.

The high-resolution curved LED wall, assembled from 324 ROE Visual Diamond DM2.6 LED panels, is 18m in width and 4.5m in height. The LED set-up is divided into two categories: in-camera LED and LED screens for lighting purposes. The rear wall, which acts as a backdrop to performances, is built with ROE Visual Diamond DM2.6, ROE Carbon CB5.7mm is also used for both the height-adjustable LED ceiling and movable lighting dollies.

"Diamond 2.6mm is the LED product we tested for in-camera shots and has proven to be worthy of various seals of approvals from cinematographers, VFX teams and DOPs. The LED ceiling and lighting dollies use CB5 and this has been previously used on the Mandalorian and our own tests. As they are out of the camera, these are used mainly for reflections and lighting subjects because of the higher brightness inherent to the panel”.

"Each time, ROE keeps coming up as the best in-camera
across multiple product ranges.
There's no comparison on the market".
Jack James, Director at 80six.

Set in 3500 sq ft space, there's ample space for incoming film and TV productions to capture wide-angle shots and complex camera movements. Large sets, props and vehicles are easy to bring in through the loading bay on the ground floor.
"We think that the increased demand for this new method of shooting will continue even after restrictions ease.  The benefits are huge on time and resources: film productions can send one person abroad to laser map an environment and then bring it back to the UK, rather than transport the whole crew overseas. Onset, filmmakers can shift virtual environments at a click of a finger and are not restricted by physical environmental limitations.", Jack adds.

Game engine technology, LED screens, camera tracking, and virtual set extension combine in a cutting-edge solution that transports talent into an immersive virtual environment, one where they can move around and interact in real-time with content displayed around them. The Disguise workflow and extended reality technology can be applied to anything from award shows to corporate events, music videos, live-streamed concerts, sports broadcasting or commercial shoots.

"Having carried out fairly strenuous tests on different panels and manufacturers, each time, ROE keeps coming up as the best in-camera across multiple product ranges. ROE's customer support is second to none – there's no comparison on the market", Jack James, Director at 80six.

80six provides Film, TV and Event Producers with a Covid-compliant virtual production facility and a team of specialists with years of expertise in LED technology, video system integration, and real-time engines to deliver complex productions that blend physical and virtual worlds.